Following on the previous Gaia-X Compliance article, today’s article will focus on a term introduced a few months ago in Gaia-X, “Compliance as Code“: what is it, why we need it and how to use it.

Lessig article’s main idea is that the software, which is literally surrounding us today, is constraining our behaviour. The software – or code – then acts as the “law” because it restricts and draws the boundary of what the users can do or not.

Example: a UI without a button or an API without a route to export personal data would lock a user from migrating its data to another service. The service’s developers are “regulating” what the user can do or not.

This paradigm of “code is law” is still true nowadays but slowly shifting towards “law is code” where the regulations define the set of action and draw the boundary of what can and should be done in the digital space.

Examples of such regulations in Europe are, and not limited to, the Digital Service Act, the Digital Market Act, the Data Governance Act, the next Data Act and the future other acts being developed by the European Commission.

The analysis of the regulations is out of scope for this article which, however, will open the discussion of how to operationalise those, especially in the digital space when the regulations are over hundreds of text pages.

The field of Regulatory – Technology (Regtech) already exists for a decade and supports companies to be in conformity with the regulations via the use of technology.

Most of the work done in this area is on the digitalisation of paper-based process and still heavily rely on manual assessment.

The concept of Compliance as Code comes from Infrastructure as Code where the managing and provisioning of infrastructure is done through source code enabling repeatability and reproducibility to enforce consistency instead of tedious manual process.

The second goal of Compliance as Code is to produce digital proofs that are legally relevant and can be assessed by the parties involved in the source code and if needed the judicial authorities of the appropriate jurisdiction.

🧑‍💻Dev-to-dev: the proofs can be, and not limited to, monitoring or history logs, workload remote attestations, cryptographic signatures for integrity and authentication, like the DKIM-Signature header for emails.

It is important to note that Compliance as Code does not change the rule of law or governance. It remains a tool that does not claim to replace human judgement and expertise.

🧑‍💻Dev-to-dev: A typical, CAUTION, this machine has no brain, use your own. type of disclaimer is needed to avoid rm -rf /

Like for Infrastructure as Code solutions which define models for deploying networks, compute instances, storage, load balancer, …, a descriptive model is required for the Compliance as Code.

In Gaia-X context, the main model is defined in the Gaia-X Architecture document. 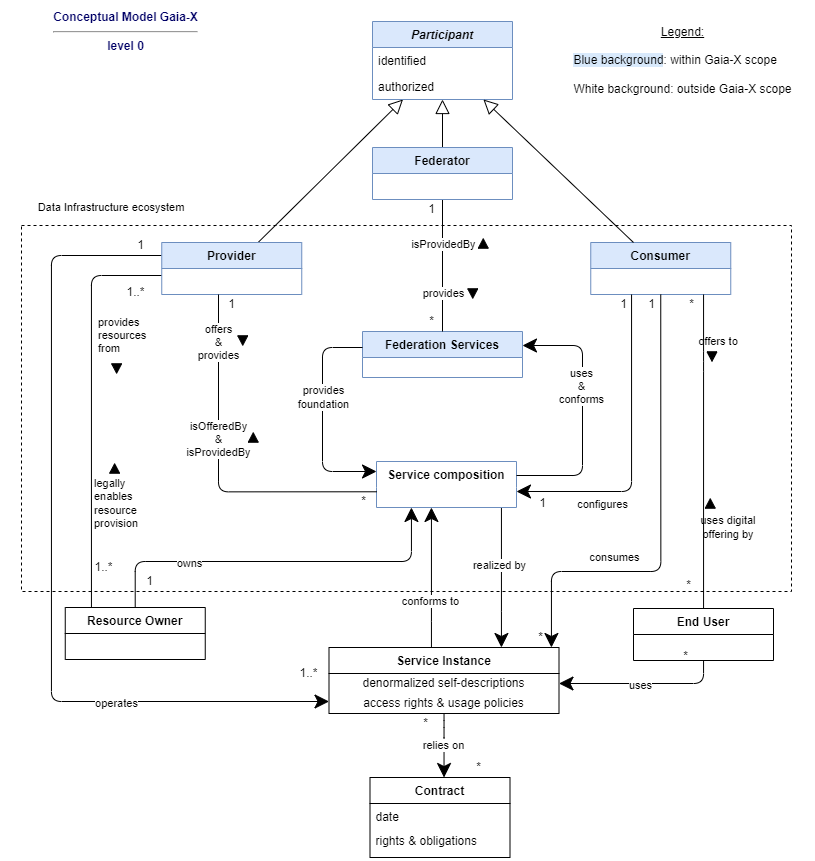 Additional more detailed descriptive models will complement this one and will be covering:

Given a descriptive model, the next step is to create a language.

Below are two examples of Infrastructure as Code to deploy an OpenStack Virtual Machine instance, one using YAML file formatted for Ansible, one using Terraform language HCL. 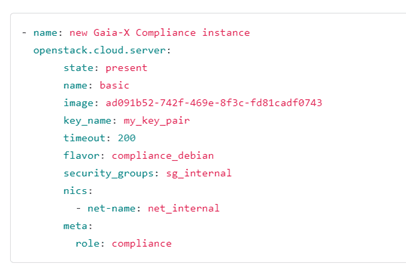 Reading the code above, even if it’s two different languages, it’s possible to identify similarities and patterns because their descriptive models are also similar.

Creating a language for a given domain and objectives is not new: Esperanto, Klingon, Dothraki, Quenya, C++, Haskell, Prolog, Python, … Ha’

For the conciseness of the article, let us focus on the ones relevant to our topic. We need to

The first point can be addressed by using Unicode characters encoded in UTF-8.

The second point is very much linked to Control Structures for conditional, repetitive or sequential flows and variable assignment. 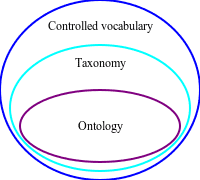 Given a domain, defining a controlled vocabulary is to come up with a flat list of terms that have a unique unambiguous definition within that domain.

A control vocabulary used by several entities or in Gaia-X context, several ecosystems or dataspaces, enables semantic interoperability by providing a consistent representation of information across documents and records.

Semantic interoperability is here an important notion. It’s the ability to automatically interpret the information exchanged between two or more parties.

However, controlled vocabularies are basic constructs and don’t offer any type of rule inference nor structured extension. For that, we need a taxonomy.

A taxonomy is a hierarchically ordered controlled vocabulary.

🧑‍💻Dev-to-dev: WARNING, in semantic subclassing from two classes gives you the intersection, not the union of the two.

With this approach, it’s possible to classify and create relations between terms.

Given a Gaia-X defined taxonomy, it’s possible for the ecosystems or dataspaces to easily extend it with their own taxonomy, while keeping a common layer of semantic interoperability.

Given one of the main objectives of the Gaia-X association to ease and accelerate data exchange, it is of high importance to address the need of semantic interoperability across ecosystems and dataspaces. This is the reason why several Gaia-X Working Groups are defining taxonomies by identifying the invariants: it enables to measure and compare criteria and compute rules using a common vocabulary.

Warning: the focus here is on the semantic interoperability for the negotiation of the service access or data usage, not about the data being exchanged.

It’s important to note that defining a taxonomy does not define rules. It is still the responsability of the parties involved in the negotiation to come up with their own criteria. The parties operating the engine to compute the rules are accountable for the execution of the negotiation – this will be covered in a future article about the traceability and integrity of a software execution.

While the above example gives a glimpse of how negotiation can be improved in terms of transparency and effort, a taxonomy does not capture the domain specific regulations and meaning formulated in natural language. For that, we need an ontology.

An “ontology is a formal, explicit specification of a shared conceptualisation“. (Gruber,1993)

In our case, it means to extract knowledge from texts in natural language and create a model that is understandable by an algorithm so one can automate the rules of the text with a computer.

Building an ontology is significantly more complex than building a taxonomy and for the time being, we limit ourselves to ontology capturing the invariants per domain and by priority relevant for our members.

🧑‍💻Dev-to-dev: check out a small ontology and a more complex one for a Pizza menu.

The Gaia-X Compliance is an ontology and our first version can be found here.

Also, even if each domain – Service composition, Data Contract, SLA terms, EULA, Privacy Statements, … – might start with distinct ontologies, it is expected that those ontologies will cross-reference each others.

Going back to the original topic of Compliance as Code, assuming we now have a suitable language, the next step is to write the specification and develop a software stack enabling technical interoperability, ensuring the traceability and integrity of both the exchanged messages and computed results, across ecosystems

Several associations are already working together:

🧑‍💻Dev-to-dev: we need to develop the equivalent of the Infrastructure as Code commands below, with immutable logs

The next article will cover how Verifiable Credentials are used as the backbone of the Gaia-X Compliance and the importance of the Verifiable Data Registry governance.

In conclusion, Compliance as Code is a mean to consistently produce digital proofs that are legally relevant, using semantic interoperability of a shared ontology and a software stack capable of ensuring traceability and integrity of the rules execution.

Given their respective expertise domain, each Gaia-X Group is expected to contribute to the Gaia-X ontology and provide technical expertise or technical validation. Please liaise back with Cristina.Pauna@gaia-x.eu to support with relevant feedback.

Check out https://docs.gaia-x.eu/framework/ to browse our deliverables.

At Gaia-X, we are developing a digital governance based on regulatory, industry standards and requirements from our members contributing to the project (large and small industries, providers and users of technologies, academics, and trade association) to let them define the rules and characteristics necessary to fulfil the real market expectations.

The European Commission has issued a study on the impact of open-source software and hardware on technological independence, and innovation discussing the necessity of services that promote the use of open source and equally endorse the implementation of the necessary software.

#GaiaX CTO @ticapix: "The #GaiaXFramework shows how specifications and software components, as well as their operationalisation, fit together to create technological trust and provide market transparency."

#GaiaX - 2023 the year of #growth: opportunities for companies and ICT suppliers: an interview with Aniello Gentile, manager of Enel Group's Global Cybersecurity unit and member of the board of directors of Gaia-X: https://www.ilsole24ore.com/art/gaia-x-2023-anno-crescita-opportunita-aziende-e-fornitori-ict-AEC90TeC?refresh_ce=1